Travel to Ancient Egypt with Microgaming and Zodiac Casino 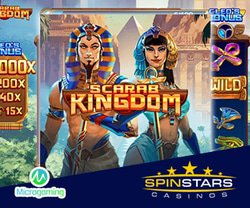 Discover the treasures of ancient Egypt while playing Microgaming's new slot at Zodiac Casino and benefit from a Cleo's bonus feature, a Pharaoh's free spins feature, scatters, wilds, and more.

There has been countless video slots that take players on an epic adventure to ancient Egypt. However, only a handful of these titles can match the class and design that is portrayed in the new Scarab Kingdom slot from Microgaming. With a charming ancient Egyptian theme, the graphics in the new Scarab Kingdom slot are phenomenal, complimented by an Egyptian-style soundtrack that perfectly fits the atmosphere in the game. The background is set against Pharaoh's Palace, complete with a waterway and lush green garden to further enrich your stay in ancient Egypt.

The new Scarab Kingdom slot from Microgaming casino software is driven by 5 reels with 4 rows and comes equipped with 30 non-adjustable paylines to provide all the winning opportunities on the deep blue reel structure. You can also look forward to an extraordinary selection of lucrative bonus featur4es, such as scroll wild symbols, scarab scatter symbols, a wild scrolls feature, a Pharaoh's free spins feature, and a Cleo's bonus feature along with a maximum payout worth 5,000x your stake. Make sure to download the Zodiac Casino software on desktop or mobile to start playing this game today!

During your visit the ancient Egypt, you'll get the opportunity to meet the Pharaoh King and the Pharaoh Queen as both characters are the highest-paying symbols in the game. Landing five Pharaoh King or five Pharaoh Queen symbols on a single payline will produce a top payout worth 10x your stake. Both character symbols can also appear in stacked formation up to four symbols high to further improve your chances of winning big.

When you are ready to set the reels in motion, you simply need to click on the golden casino chip to set your bet amount before selecting the spin button. You'll find 10 different bet denominations in the new Scarab Kingdom slot, ranging from a minimum of $0.20 a spin up to a maximum of $25.00 a spin. Please keep in mind that the feature progression in the slot will be saved per bet amount.

There is also loads of additional features available in the game to make your gaming sessions more enjoyable. This includes a Quickspin feature, reducing the length of each spin so you can get through more spins, and Sound Settings where you can enable/disable the soundtrack and game sounds if you want to play in silence. Players can also make use of the Autoplay feature, allowing you to pre-select a set number of spins to play out automatically while you sit back and take in the graphics and animation.

Although the theme is very familiar to online players at Zodiac Casino, the bonus features provide something fresh to keep you playing for hours on end. The wild symbol is portrayed by the scroll and will replace all other symbols on the reels to assist with winning combinations. However, the scroll wild symbol will not replace the free spins symbol or the scatter symbol. When you land 5 scroll wild symbols on a winning payline, you will also trigger a payout worth 10x your stake.

Once the Wild Scrolls feature is triggered, a wild scroll will expand to cover the entire reel. The wild scroll will then shift one symbol position down with every spin that follows until it drops of the reel set. Thereafter, the scarab collector will reset back to 0 and will start collecting scarab scatter symbols again for you to reactivate the feature. This is available on all five reels and provides additional winning opportunities with expanded wild symbols.

The free spins symbol is portrayed by the red beetle and will only make an appearance on reels 2, 3, and 4. You will need to land 3 red beetle free spins symbols in a single spin to unlock the Pharaoh's Free Spins feature. Once unlocked, you'll be rewarded with an undefined number of free spins. You will start your free spins with a fully stacked scroll wild symbol on the center reel. Just like in the base game, the stacked scroll wild symbol will drop one symbol position with every free spin that follows.

Microgaming's new Scarab Kingdom slot is a highly volatile game with a return to player ratio of 96.13%. It also comes with a 30.99% hit frequency, creating winning combinations on just under a third of your spins. We recommend that you claim an exclusive bonus at Zodiac Casino as this will further increase your chances of winning in ancient Egypt.

Read the latest online gambling news at ZodiacCasino. We offer up-to-date news coverage and information on everything from new game arrivals to exclusive offers. Visit our website regularly to avoid missing out on top entertainment.

Microgaming is famous for providing the most sought-after online slots. Register an account with Zodiac Casino to play the latest release: Dragons Cache Slot.
Read More

15 Tridents is the newest slot from Microgaming. Learn how to use the two sets of reels and special symbols to activate bonuses, free spins, and lucky rounds!
Read More

Microgaming is among the top-rated online casinos in the UK, offering the best casino games. Play the best live dealers at Zodiac online casino.
Read More

At Zodiac Casino users can look forward to playing the Dr Wildshock: Mad Loot Lab slot. Here we will review the slot and what makes it a good option for users.
Read More

Microgaming is one of the best slot developers in the online gaming industry. Read this review of Squealin Riches; the latest online casino slot release.
Read More